by the Continuously Innovating Esri

A recent article by Forbes examined the success of Esri over the years and was amazed by the tenacious vitality of the company. 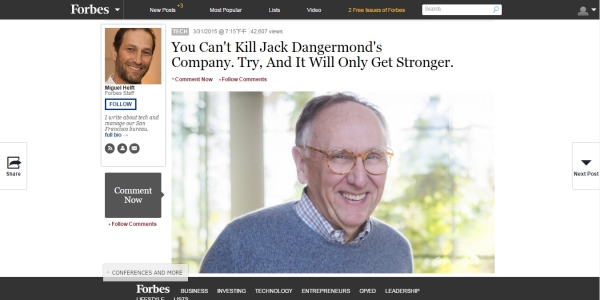 The article mentioned that Esri has experienced at least five major shifts in technology industry, but for every time the company has overcome the challenges and taken its business to a new height. The observation was echoed with the remark of Esri’s co-Founder and President, Jack Dangermond: “We not only survived but thrived.”

One important reason for Esri to remain competitive in the market is its commitment to research and development. Just as noted in the article, the company invests about 28% of its annual revenue in R&D, a percentage which can only be matched by few ones in the technology industry.

Looking at the future, Esri is continuously embracing new technologies including real time GIS, Internet of Things and Social Media, and shows no sign of slowing down. To learn more about the revolutionary technologies of Esri, please check out Esri.com.