by Launching GeoHub with Esri 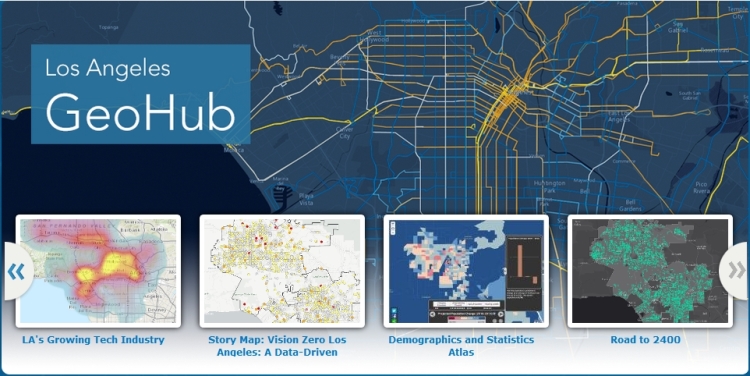 The Los Angeles GeoHub can be viewed as a blueprint for Smart Cities.

GeoHub is a portal of open location-based data from city departments that empowers both the public and city employees to explore, analyze and build on the data. It runs on Esri’s ArcGIS platform. By making more than 500 types of map data including real-time traffic data, road obstructions, business activity and the inspection status of buildings available for real-time analysis and use by decision makers, first responders and the public, GeoHub helps Los Angeles citizens better understand their communities, and City departments better coordinate construction, road paving, and public safety efforts.

In fact, GeoHub is a blueprint for smart cities. The aim of GeoHub is not just to offer data -- it is to infuse the community with data and applications generated by government agencies and the public. The portal offers application programming interfaces (APIs) and software development kits, as well as map templates, configurable apps and app builders to quickly develop, customize and deploy different projects.

Therefore, ordinary citizens who aren't building apps can download the data or view GeoHub via the map interface, while programmers can make use of the real-time collaborative and do-it-yourself mapping tools provided by the portal to develop innovative Smart City applications and services.

Street Wize is a web application that pulls information from GeoHub to show the expected duration of activities taking place on the city’s streets, including road work, capital projects and special events.

Eric Garcetti, Mayor of Los Angeles, unveiled the GeoHub together with Esri President Jack Dangermond. He described the portal as one of the most complete municipal open mapping platforms in the country. He was especially excited about the fact that the portal provides real-time access to all the data the Government need in one convenient place, makes urban planning decisions smarter and makes it easier for emergency responders to get to their next location.

Some of the biggest users of the portal are city agencies that couldn’t previously access information from other departments. Mayor Garcetti described in a hypothetical scenario of an earthquake aftermath, how a firefighter could quickly be able to find fire hydrants, sewer lines, electrical equipment, building infrastructure and the location of other emergency responders by using applications based on the GeoHub. In conclusion, Mayor Garcetti believed the GeoHub would help to improve the quality of life in Los Angeles as a Smart City.

“We are thrilled to partner with Mayor Garcetti and the City of Los Angeles to launch a data insight model that includes powerful collaborative and do-it-yourself mapping tools,” said Esri President Jack Dangermond. “Our hope is that other communities around the world will follow Mayor Garcetti’s lead and enable public works, transportation, health services, and other agencies to share location data and analysis in real time. That kind of data accessibility and transparency boosts community engagement. It also creates trusted networks that link local government to its businesses and its citizens.”