Digital Mapping for the Population Censuses/

The Census and Statistics Department embraced technological advancement with the adoption of the Geographic Information System (GIS) technology in the 2001 Population Census, the first time the technology being applied in population census in Hong Kong, through a computer system entitled "Digital Mapping System (DMS)".

The DMS enables more efficient updating, production and maintenance of maps and effective monitoring of fieldwork progress. This solution provided the Department with the capabilities to produce large volume, multi-format and multi-scale maps efficiently. In the 2006 Population By-census, around 5 000 temporary field workers used the maps produced by the DMS to locate their assignments for interviews of around 0.23 million households in a short span of time. Moreover, apart from production of maps, the DMS was enhanced to enable more extensive application of GIS technology to support various stages of work including allocation of assignments and itinerary planning.

Although the CSRP research has just been conducted for around 6 months, there are already some initial findings. Professor Yip said that they have identified 6 clusters of poverty around Hong Kong, which approximately locate in Tuen Mun, Yuen Long, North District, Kwun Tong, Sham Shui Po and Kwai Tsing. There are different characteristics associated with different clusters. For example, many single-parent families and a comparatively high unemployment rate can be found in the Tuen Mun and Yuen Long clusters, while more elderly and new immigrants can be found in the Sham Shui Po and Kwun Tong clusters. 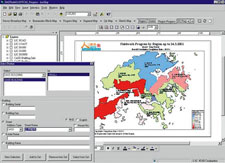 The system helps allocation of assignments, itinerary planning and various tasks for project supervisors and field workers in a short span of time.