With a fifth of its population living in poverty and Gini coefficient at 0.537, Hong Kong is seriously troubled by the problems of poverty and inequality. By utilizing GIS software tools, the Hong Kong Jockey Club Centre for Suicide Research and Prevention (CSRP) at the University of Hong Kong (HKU) is doing a research on the phenomena of poverty in Hong Kong and the result can contribute to the betterment of poverty alleviation policies by the Government. 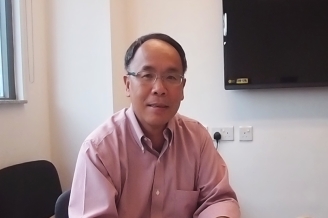 The publication of Hong Kong’s first official poverty line in 2013 was viewed as an initial while important step for Hong Kong to tackle the poverty problem. After the move, it is important for the public to have a better understanding of the situation and then provide policy direction for the Government’s poverty alleviation measures.

During the analyzing process, data from different sources, including the regional socioeconomic characteristics in population census data and the basemap from the Lands Department, are put together and linked with spatial information to gain insight into the relationship between space and poverty in Hong Kong. For example, the distribution of the poor defined by the poverty line in an area is compared against parameters such as age, marital status, number of family members and children, family income of the community on a digital map. The correlations, if any, can be identified and presented in a multi-dimensional manner and visualized format with the assistance of GIS tools on computer screens.

Professor Yip further elaborated that the research team divides the areas being investigated into certain street blocks instead of adhering to the traditional zoning of 18 districts. Analysis based on the method can have a much more accurate, and detailed account of the characteristics of a community and the heterogeneity of the communities can be shown.

Although the CSRP research has just been conducted for around 6 months, there are already some initial findings. Professor Yip said that they have identified 6 clusters of poverty around Hong Kong, which approximately locate in Tuen Mun, Yuen Long, North District, Kwun Tong, Sham Shui Po and Kwai Tsing. There are different characteristics associated with different clusters. For example, many single-parent families and a comparatively high unemployment rate can be found in the Tuen Mun and Yuen Long clusters, while more elderly and new immigrants can be found in the Sham Shui Po and Kwun Tong clusters. 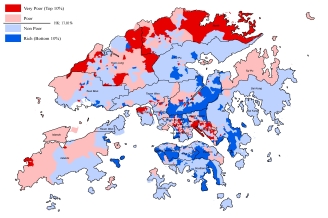 The distribution of poverty rates across large street blocks in Hong Kong. (based on 2011 census data) (Courtesy of CSRP)

Professor Yip suggested that the Government can adjust its poverty alleviation measures to different social fabrics based on the result of their research. It can provide strengthened support, such as child care services, subsidy for long distance travelling to work, vocational training and assimilation services, to the residents in different clusters. He emphasized that one policy or measure is not going to fit all, the support has to be tailor-made in order to suit different groups of beneficiaries.

CSRP has introduced GIS into their research projects for around 2 years and Esri’s ArcGIS for Desktop is the platform they are using. Professor Yip said that there is no difficulty for their team members to pick up the tools as they are students or professionals in statistical analysis and in fact the tools are quite user-friendly. According to his experience, GIS helps their research works the most by locating those so-called “hotspots” of their concerns such as suicide, divorce and domestic violence quickly and in a visualized way. It also helps to identify the geographical mismatch of people in need and designated resources like community services.

In the future, the valuable tools can be applied to other research projects of the centre and contribute more to the adjustment of Government policies and measures for the society.

GIS have been applied in Poverty Research, Human Services and Managed Care globally. Readers interested in the subjects can visit the following sites to learn more:

Lesson on Using ArcGIS to Investigate Poverty
4. A Lesson on the Spatial Distribution of Poverty