Government is one of the sectors that GIS has been applied prominently to improve the quality, responsiveness and effectiveness of services that are provided to citizens. The Macao Transport Bureau (DSAT) has developed a management system of traffic incident and has been awarded the Special Achievement in GIS Award (SAG Award) in 2014 Esri International User Conference. 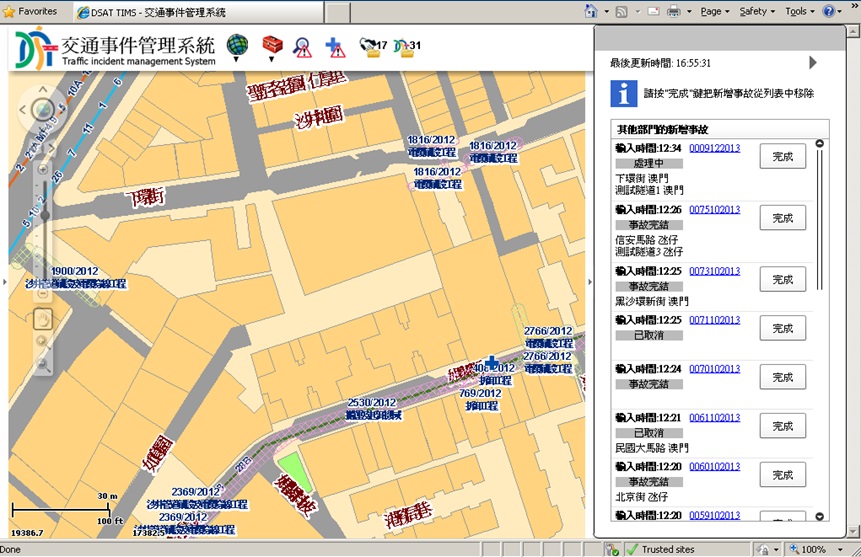 The interface shows the information combining current bus information and road maintenance information in order to analysis the impact of the traffic incident.

The city of Macao had experienced rapid growth in recent years. At the same time, road traffic is getting heavier. As the number of vehicles and passengers both reached a historic peak, road safety and traffic accidents had become a public concern. Therefore the Macao Transport Bureau (DSAT) had developed an internal system called Traffic Incident Management System (TIMS) to assist their daily operation and improve information sharing across different stakeholders.

In fact, the system is a web-based GIS enabled Common Operational Picture (COP) for different government departments to collaborate in real time. Essential geospatial information, which includes photos, video, topographic features and area boundaries, is provided by the COP and enables decision makers to respond instantly to various incidents.

DSAT has been actively using GIS technologies since 2009. The previous systems developed by the Bureau include Bus Route Enquiry System and Road Maintenance System, which have been deployed in order to manage the information of road transport more efficiently and effectively. TIMS is the latest platform that integrates the information of incidents that happens on the road every day.

The system provides basic spatial information across the city, such as the basemap, public transport routes, road excavation and other relevant data. It allows users within DSAT to locate incoming incidents on a web GIS platform. Additional information such as the incident type and duration are also available on the platform.

Taking bus as an example, with the existing Bus Route spatial information, TIMS is capable of prompting the bus lines which have to reroute as affected by the incident instantly. The new systematic approach facilitates the timely sharing of traffic information across different government departments, thus improving necessary co-ordination work effectively.

TIMS is also capable of broadcasting messages to the public for any traffic diversion due to road incidents, alerting road users just in time. The system is running from 06:00 to 24:00 daily, and its information would be shared with some more departments as well in the future.

TIMS is a proven success and it has become an important part of Intelligent Transportation System (ITS). It is powered by ArcGIS Server using Flex API, built by Professional Services Team of Esri China (HK). By integrating the latest technologies and management systems, the Transport Bureau has successfully accelerated the ITS development. The benefits of ITS have now become noticeable to both citizens and tourists especially during the expansion of its infrastructure and road network. It is a remarkable milestone for the City of Macao to move one step closer to a world-class Smart City.