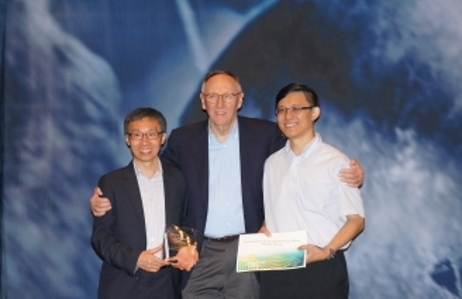 Hong Kong has a high concentration of developments in close proximity to man-made slopes and natural hillsides, which are susceptible to landslides during heavy rainfall. There had been severe landslides in the past resulting in high fatalities and significant damage to properties. The GEO has been given the mandate of managing landslide risks in Hong Kong.

A comprehensive inventory of man-made slopes and natural hillside catchments is essential to the GEO for doing the job. The inventory initially started with some 10,000 man-made features in the urban areas, which is now expanded to include more than 60,000 sizeable man-made features and natural hillside catchments spanning all over Hong Kong. Over the years, the GEO collects a vast amount of slope-related data, as well as other spatial data such as aerial photographs, land topography in LiDAR dataset and drillhole logs. The digital data in the inventory amounts to more than 5.5 TB. No doubt, it was already a time-consuming task to retrieve the data, let alone integration for meaningful data mining and spatial analysis.

The GEO launched the Geotechnical Information Infrastructure (GInfo) in 2009. The GInfo has resolved the aforesaid problems by providing effective data management and analysis tools. It is a web-based application powered by Esri ArcGIS technology, which provides an effective platform for retrieving spatial and textual datasets in the GEO and conducting spatial analysis using predetermined geoprocessing functions. These geoprocessing functions are important tools for interrogating the spatial data in new dimensions and assist users in making informed decisions. 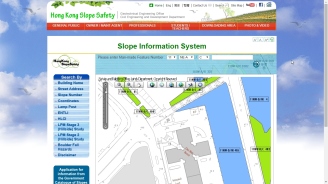 The public can search slope information and maintenance responsibility of slopes from the Slope Information System of CEDD's website which promotes the importance of slope maintenance.

All staff members of the GEO/CEDD, including professional, technical, inspectors and clerical, are users of the GInfo. The GInfo is also deployed on the Internet, which means the assets of the GEO spatial data and application are available to the GEO staff and authorized consultants anytime anywhere. To most of the users, GInfo is now indispensable. The GInfo also includes a public interface on the Internet, from which the public could retrieve relevant slope-related data and plan maintenance works for their slopes.

The GInfo is implemented with ArcGIS technology. On the hardware side, the system comprises several web servers, map servers, data servers and workstations.

The GInfo web applications are developed with Flex API of ArcGIS Server technology. It leverages the advanced geoprocessing capabilities of ArcGIS for Server, which allows users to perform not only web-editing tasks but also advance analysis, such as viewshed analysis and spatial distribution of real-time rainfall for landslide prediction. The high performance of ArcGIS spatial indexing feature enables the GInfo to serve a large volume of data to users very efficiently via the internet. ArcGIS for Desktop is used for system and data management, and carrying out complex spatial and geostatistical analysis to derive thematic map products.

Just like other winners of the SAG Award, the work by the GEO of CEDD shows that innovation of GIS applications is improving our world. Once again, congratulations to Geotechnical Engineering Office (GEO), Civil Engineering and Development Department (CEDD) of the HKSAR Government! 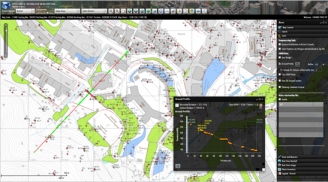