Esri UC 2015: A Showcase of Geo-enlightenment

Esri User Conference (Esri UC) 2015 was once again successfully held in San Diego from July 18-24. With the theme, “Applying geography everywhere,” more than 16,000 GIS professionals from 120 countries around the world converged in the premium GIS event for sharing ideas and best practices for improving our world through maps and applying geography over digital platform. 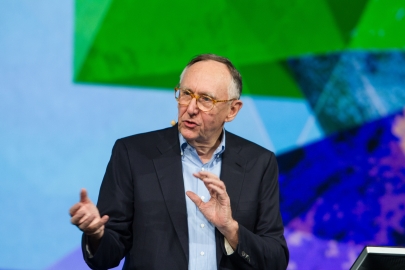 Jack highlighted the era of “Geo-enlightenment”.

The conference was open to groups that use GIS software in the fields of business, defense, education, environment, government, health and human services, natural resources, public safety, transportation, and utilities. The different ways that people visualize their work in maps were truly eye-opening.

In addition to learning about the latest applications of GIS, attendees were also able to refine techniques, learn more about the extensive tools within the software, and meet other professionals working in various fields.

Jack Dangermond, Esri president, began his keynote with the review of how GIS is being used by users and in people’s lives, spanning precision agriculture to health to buildings. He highlighted the trend of “Geo-enlightenment” as people have been become more knowledgeable about the interconnectedness of things through maps and geography.

According to Jack, GIS has been evolving continuously to cope with the trend. Traditionally GIS set up which was hierarchical with stove piped data, while today it became a platform of networked and shared geographic understanding. For instance, Web GIS uses a transformational architecture which is opening, integrating and simplifying everything. It creates a system of engagement. In addition, real-time GIS and connected GIS empower everyone with geographic advantage, create shared information and facilitate collaboration.

Jack went on to present the extensive coverage of ArcGIS product family. He emphasized that Esri has added security and an entire group of open technologies that are now available on the web and on premises.

The geoinformation model was another concept brought up concurrently with Web GIS by Jack and other Esri experts. It is a way to abstract different types of geoinformation and organize it into simple layers, rendered into 3D web maps and scenes. The model makes GIS simple; as it is easy to work with web maps. It can be abstracted from all over the organization, or the web, and made into simple web maps. 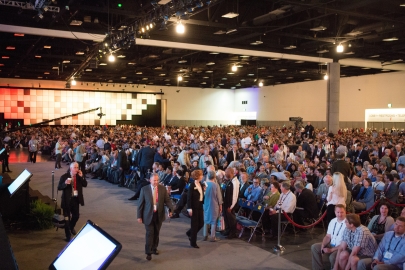 Esri UC 2015 was a showcase of the numerous advancements in GIS. Geospatial analysis now can be cloud based for everyone, and is now available to anyone in an organization and easy to use. Data exploration tools also let users learn more about their data, providing valuable insight to share with others. Story maps now can be upgraded to “story map cascade”, which is a collection of story maps that create an immersive experience for viewers to scroll through.

The GeoAnalytics Server is Esri’s latest response to the trend of Big Data. It is an ArcGIS extension to be launched next year for dealing with very large datasets. It will greatly speed up the computation of big data sets using scalable architecture done by parallelizing computation.

Of course, there is no better way to learn GIS trends and best practices from the users themselves. Throughout the week, more than 1,000 users had delivered presentations detailing how GIS helps their organizations in a number of ways. In the occasions of the Plenary Sessions and the nearly 300 moderated paper sessions, speakers had shared lessons learned and best practices that could help their peers succeed.

Irish Water, the new national water utility responsible for providing and developing water services throughout Ireland, was awarded the Enterprise GIS Award by Jack on stage this year. The purpose of the utility is to safeguard water as a precious natural resource and to deliver water services in a way that protects the environment and meets the needs of all citizens and industry now and in the future. 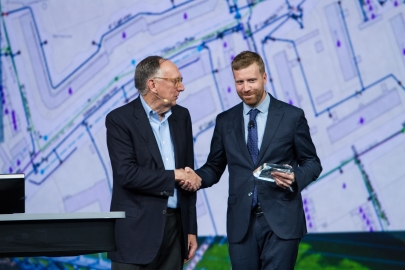 In order to achieve that goal, Irish Water consolidated its operations onto a single GIS platform, Esri’s ArcGIS. Therefore, more than 2,000 users can access a national geodatabase of water assets across departments in asset management, operations, workflows, capital investments, strategic planning, and customer services. This means Irish Water will be better able to deliver water services, including increasing access to potable water.

In the District of Columbia, USA, an interesting study was conducted on the local trees. ArcGIS Pro was used to help solve a local problem where street trees had decreased in parts of the district in 2014. It was used to create urban tree canopy studies that regulate privately owned as well as city trees. With data added from the cloud, an accurate picture of what was going on was formed, and the Government was able to identify and fine those people who were cutting trees illegally.

Another great GIS application showcased in Esri UC this year was Atlanta International Airport, the world’s busiest airport, which handles more than 250,000 passengers every day. The GIS team of the airport uses a safety critical app to make sure there are no runway problems and to share real time data across other GIS apps. It also uses Explorer for ArcGIS to manage grass cutting on airport grounds, and Web Map to manage other aspects such as wildlife on the airfield and concrete slabs. Technologies such as Indoor GIS, 3D web and mobile GIS were deployed, and Esri ArcGIS Pro was also used to run scenes in real time. 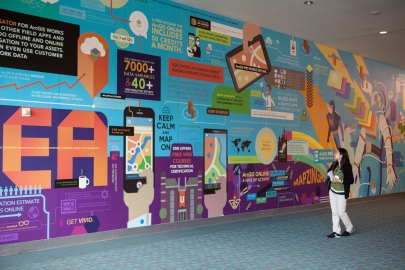 Other impressive GIS stories included a water management system to reduce flooding hazards in Florida, a farm management system to maximize yield across USA, keep costs low and be a good steward of the land, an Australian fire management map platform for predictive services and rapid emergency response towards wildfires, and GIS modeling tools for safe burials and treatment on Ebola outbreak in West Africa. Just as noted by Jack: “The User Conference is our opportunity to recognize their important work, learn from them, and empower them with even better tools and techniques to continue their mission.”

In conclusion, Jack reminded the audience that it’s only been 50 years since people started putting maps into the computer. He urged fellow GIS professionals around the world to prefect the nervous system for the planet being created by GIS, so that it will be a system for understanding and better decision making, leading to a more sustainable future.